In a rain soaked Sunday for round five of the Shannons Motorsport Australia Championships, a full day of racing was had despite the many flags and safety cars.

AUTO ACTION’s Garry O’Brien provides the full wrap of all the days action.

Race two was the Enduro Cup, a 40-minute affair that was rain affected and won by Tom Sargent. Despite a spin in the slippery conditions, Brett Bolton was the Pro-Am class winner, and similarly Lachlan Harburg took out Class B.

Rain showers hit the track just as the cars took to the circuit and half the grid elected to pit for wet tyres. In the mixed up order Aron Shields led until a spin at Turn 3, then Eric Constantinidis took over until he spun. Among the pre-race pit visitors, Ryan Wood and Tom Sargent forged through to the lead and towards the end, the latter went ahead for the win. Lachlan Bloxsom picked off two places on the final lap to place third ahead of Courtney Prince and Harrison Goodman.

Boulton was sixth ahead of Tom McLennan, Shields, Jason Miller, Matt Slavin, Sam Shahin and Indiran Padayachee who led Pro-Am until he too spun.

The honours were shared in the (only) two races of the fourth round with Adam Bressington (Chev Camaro) the first up winner, and then Ryan Hansford (Holden Torana A9X) the second.

There was misty rain for the first outing with tyre choice being crucial. In his 100th start, Hansford led from the outset before he ran wide at Turn 1 on the second lap and gave John Bowe (Torana) the front running in his 300th start. However Bressington would spoil the celebration when he overtook the triple centurion and held on for a tight 0.024 second victory. Pole sitter George Miedecke (Camaro) was next ahead of Tony Karanfilovski (Ford Mustang), Jamie Tilley (Mustang), Andrew Fisher (Torana), Hansford and Cameron Tilley (Valiant Pacer).

Keith Kassulke (Ford Falcon XB) bunkered at Turn 10 before the race started. Bressington led Bowe, Miedecke, Hansford and Karanfilovski as the safety car emerged so the Ford could be extradited. From there the lead changed several times before Hansford won from Bressington while Fisher snared third from Miedecke as they crossed the line. Steve Johnson (Mustang) was next in front of Karanfilovski, Jamie Tilley and Bowe.

Nathan Herne took out his 10th victory of the season to extend his narrow series lead over Owen kelly in the penultimate race of the season.
Kelly came in a distant +5.2023 in a race shortend to 12 laps after a choatic start saw the grid mixed up as cars pitted to change for wets, with much of the field starting on the slicks.
Surprise pole getter, Cody Burcher, drove a fantastic race to finish in P5 after starting from the pits, along with the race winner.
It wasn’t young Jett Johnson’s day after starting in P10, finishing up in P16, whilst contenders Holdsworth and Gurton could only manage P8 and P11, ruling them out of contention with yesterdays race 1 cancelled.
Owen Kelly came away with the race victory at the final Trans Am championship race in 2022, but it wasn’t enough to unseed the reigning champion with it all to play for going into the final race of the season. 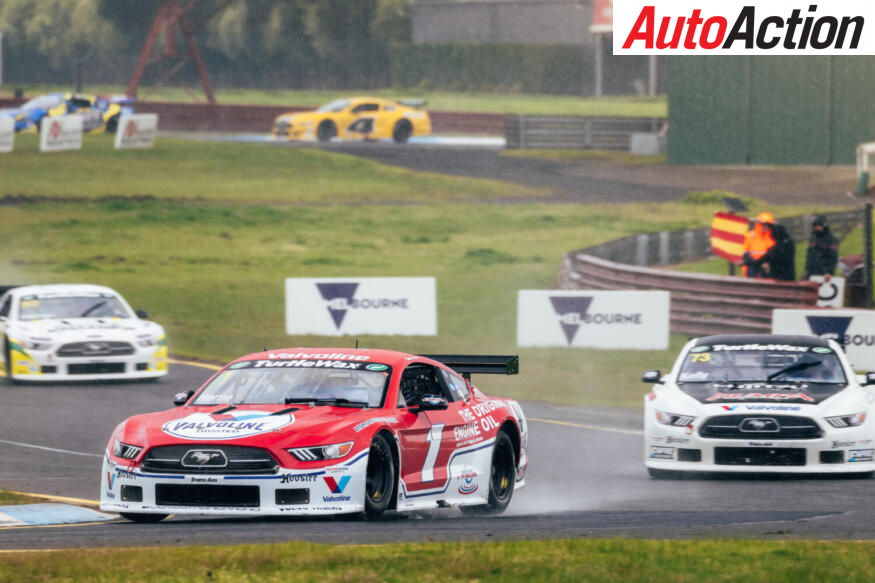 Kelly came in 5.4045s over Herne who had the early lead, with Tom Hayman completing a good wekend with a podium third after grabbing P4 in the opener.
Herne won the title racing for Dream Racing Australia last year with 8 victories, with his 2022 switch to GRM yielding 10 race wins in blatantly dominant year for the young gun.
It was a disappointing weekend for Brett Holdsworth in the #99 Camaro, with a P6 after entering the round in championship contention.
The other challenger in Kyle Gurton could only manage P12, whilst Morris, Johnson and Grice didn’t manage a finish.
The Trans Am still has one more hitout this year at the Bathurst International on November 11-13, which will not count towards the championship.

Class X BMWs, in particular the one driven by Drew Russell, dominated the second race of round three. He grabbed the lead on the first lap and only lost the front running during the pitstop schedule. Second place went to Shane Smollen with Beric Lynton third. The race was shortened and ran seven and a half minutes shy when Matt Holt (Class A2 HSV Clubsport) hit the bridge.

Dean Campbell started off pole in the Mitsubishi EVO X that Cameron Crick won Saturday’s race in, but lack of turbo boost saw it fall down the order and eventually retire. Duane West (Class X HSV GTS) was fourth ahead of Chris Lillis (Class A2 Clubsport) and the Sherrin brothers, Grant and Iain (BMW M4).

The second race teams faced diabolical conditions, a halt to proceedings for a period and an amazing finish. With Shane Van Gisbergen (Mercedes AMG GT3) in front of Garth Tander and Paul Stokell in Audi R8 LMS EVOs, the safety car was called with Garth Walden stuck off track at Turn 10 when his and the Ross Poulakis Mercedes fired off together. When the race went green, Van Gisbergen and Tander had moments on the run from Turn 6 to 7 and David Reynolds and Stokell spun. The race was stopped until the 52 minute, and when it resumed, the Pro drivers had just a couple of laps to hand off to the Ams.

Jeffri Ibrahim took over from Van Gisbergen to do the final lap but was passed by Tony Bates (for Reynolds). Bates then aquaplane off at Turn 10 which allowed Yasser Shahin (for Tander) to take the win over Liam Talbot (for Fraser Ross in their Audi). Bates was next before a two-lap penalty was applied and that promoted Matt Stoupas ahead of Gary Higgon (for Stokell). Swyftx GRM Peugeot’s Jordan Cox led early, but Brown was able to capitalise on a small mistake to hold the ascendency until the end, despite a late challenge from Autoglym Ashley Seward Motorsport Alfa Romeo of Michael Caruso.